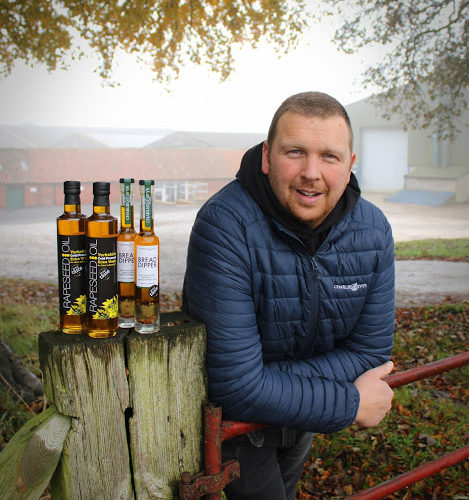 The whole team at Breckenholme is celebrating a double win at the prestigious Great Taste Awards.

Our first and flagship natural rapeseed oil was one of only 1,294 products out of 12,777 entries to be awarded a coveted two stars, whilst Charlie & Ivy’s White Balsamic, Tarragon and White Peppercorn Bread Dipper was awarded one star.

The judges described our rapeseed oil as: ‘A beautifully glossy and sunshine filled rapeseed oil with a fresh green nose full of pea shoots and beans’ and ‘This oil is delicious enough to be a dipping oil but thanks to its creamy richness, this would also be great to use in the kitchen in dressings, mayonnaise, etc and for cooking.’

We were very pleased with the judges’ feedback on the White Balsamic, Tarragon and White Peppercorn Bread Dipper, especially as it only launched this summer: ‘As a bread dipping oil it is well balanced and flavoursome; we can also imagine it drizzled over salads and other dishes too. Perhaps even poured over your Sunday roast chicken! There are many uses for this oil. Delicious.’

Organised by the Guild of Fine Food, the Great Taste Awards are often described as the ‘Oscars’ of the food world and is the world’s largest food and drink awards scheme.

“Winning these Great Taste stars is a huge achievement and is testament to our great team and Yorkshire Wolds farmers.”

Of the 12, 777 products entered into Great Taste awards 2020, only 41 percent of entries were awarded stars ranging from one to three. The panel of judges this year included; cook, writer and champion of sustainable food, Melissa Hemsley, cook, writer, stylist and voice of modern vegetarian cooking, Anna Jones, celebrated Spanish chef, José Pizarro, Kavi Thakrar from Dishoom, food writer and cook, Xanthe Clay, and baker and author, Martha Collison, as well as food buyers from Selfridges, Fortnum & Mason and Waitrose.